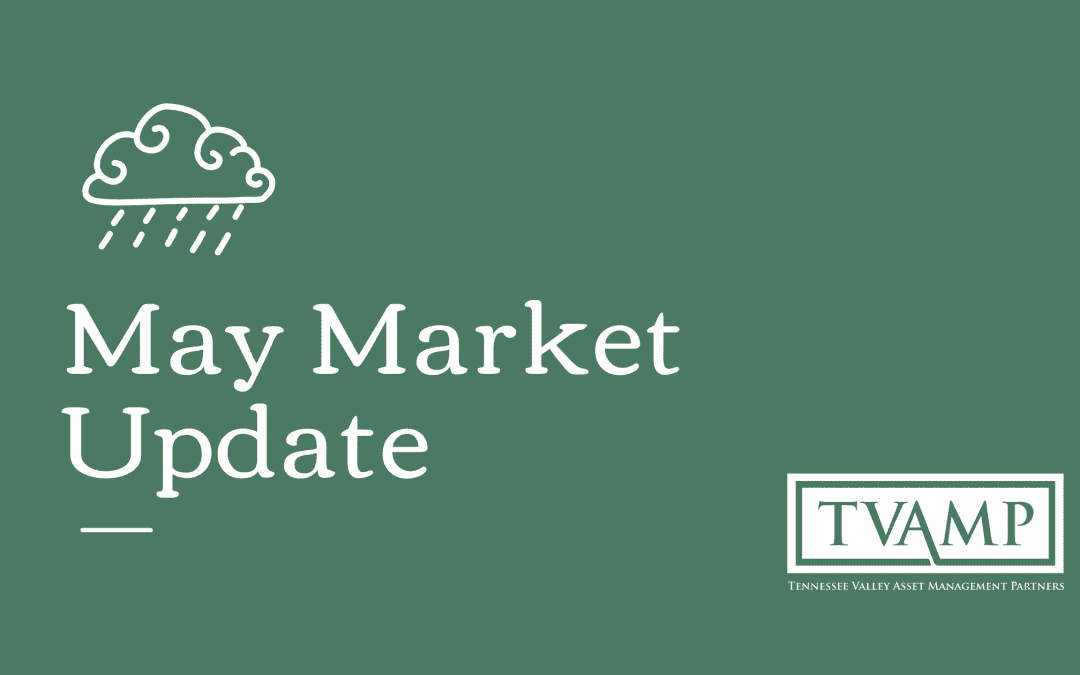 As we move into spring and leave behind the last signs of a long winter, many worries from a chilly start to the year for markets, unfortunately, are still with us.

The S&P 500 Index had its worst April in more than 40 years, leaving the index down over 13% for the year. Previously highflying stocks have come back to earth, with many of them cut in half or more. And bonds, which have historically provided support during times of stock market volatility, have done little to protect portfolios.

The concerns that have contributed to the poor start are well-known.

Historically high inflation, supply chains disruptions, China in another lockdown, geopolitical concerns, an aggressive Federal Reserve Bank (Fed) rate hiking campaign, and soaring yields have all contributed to the worries. Not to mention economic growth worries are spreading after the 1.4% decline in gross domestic product (GDP) during the first quarter.

Just as April’s dark storm clouds are often chased away by a brighter May, we remain optimistic that more sunshine could be coming.

Yes, the GDP report showed an economy that contracted in the first quarter, but that was mainly due to drags on inventory and trade, while more important parts of the economy like consumer spending, housing, and private sector investment all accelerated compared to the fourth quarter. Additionally, 2011 and 2014 both saw negative first quarter GDP prints, followed by big rebounds in the second quarter to avoid recessions. We expect GDP to grow approximately 3% this year and avoid a recession thanks to a strong consumer and a healthy corporate earnings backdrop.

Inflation could be nearing a peak, offering a potential driver for improved confidence in the second half of this year.

Used car and truck prices have come down significantly over the past two months, while shipping costs have also dropped nicely. These two bits of data suggest inflation may be past its peak, even if it may take a while for it to get back to normal. Add in supply chain normalization and the potential for a ceasefire in Ukraine to remove some upward pressure on commodities, and the Fed may not hike rates nine times as the bond market is currently pricing in.

As uncomfortable as this year has been, this action is actually about average. Additionally, midterm years tend to be even more volatile, correcting more than 17% on average, but the index rebounded 32% on average in the 12 months following those midterm year lows. Lastly, the last 21 times the S&P 500 has been down double-digits since 1980, the index rallied back to end the year positive 12 times. Don’t give up hope yet.

The investing climate is quite challenging, but based on historical trends, we believe patience may be rewarded.

Even if there may be some downside in the short term, consumer and business fundamentals remain supportive. Strong profits and lower stock prices mean more attractive valuations, and current levels may end up being an attractive entry point for suitable investors.

Please contact your advisor if you have any questions.

Become empowered with a plan

We remove the complexity

This material is for general information only and is not intended to provide specific advice or recommendations for any individual. There is no assurance that the views or strategies discussed are suitable for all investors or will yield positive outcomes. Investing involves risks including possible loss of principal. Any economic forecasts set forth may not develop as predicted and are subject to change.

References to markets, asset classes, and sectors are generally regarding the corresponding market index. Indexes are unmanaged statistical composites and cannot be invested into directly. Index performance is not indicative of the performance of any investment and do not reflect fees, expenses, or sales charges. All performance referenced is historical and is no guarantee of future results.

Any company names noted herein are for educational purposes only and not an indication of trading intent or a solicitation of their products or services. LPL Financial doesn’t provide research on individual equities.

All index data from FactSet.

This Research material was prepared by LPL Financial, LLC. All information is believed to be from reliable sources; however LPL Financial makes no representation as to its completeness or accuracy.